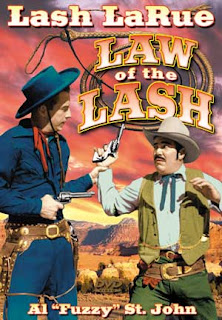 So, B-Western fans, do you ever wonder why you have seen lots of Buster Crabbes and Bob Steeles but very few Lash LaRues or Tim Holts?  The answer, other than that perhaps I have no western readers, is that many films starring the first two cowboys are in the public domain, while no Tim Holts from Columbia are PD and only one Lash LaRue from PRC.  I knew about the Tim Holt films, and saw a few of them on TCM a few years ago.  They are just inexpensive B-westerns like so many others and not as enjoyable as many, though that could be because of unfamiliarity.

I was surprised this week to discover that "Law of the Lash" starring guess who is the only PD Lash cowboy film.  I did not happen to have it, but do now.  I also found out that Lash had a short-lived TV series in 1953 called "Lash of the West."  I screened one poor quality chapter that seems to have survived.  It opens with Lash discussing one of his adventures with two guys, who may have acted in the films with Lash, then cuts to highlights from one of his Columbia films, who knows which?  They are 15 minute segments so you can't cram in as much as the half-hour Gabby Hayes Show managed.  At the end of a chase they return to talk, but the show is about over.

Codger with mustache: "I'm sure glad that Trader Joe got what was coming to him, but what was on that stagecoach the outlaws wanted?"

Younger guy: "I want to find out what Lash did with the man behind it all.  I think he knows too." 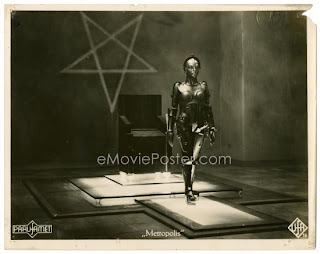 Switching gears radically, the very nice, original German still, from Metropolis shown here just sold at auction by www.emovieposter.com. How much?  $6,820.  Now that surprised me?  What is the top price paid for any 8x10" glossy still?  I will close with their lengthy description of this rare and pricey item:

"Note that this is an extremely rare "country of origin" still for this German movie! It has the UFA logo at bottom right, the "Parufamet" logo at lower left, and a faint embossed German "approved" stamp in the top right! Also note that this German still measures 9 1/4" x 11 3/4" [23 x 30 cm]. Also note that original German movie paper of any kind from this classic movie is incredibly rare and ultra expensive (the most expensive movie poster ever sold is the original German three-sheet from this movie!). 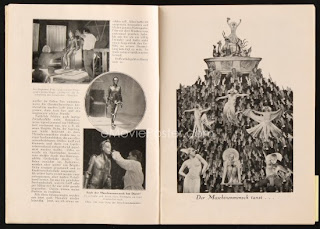 
Note that of all the 21 Metropolis stills owned by this collector, only TWO showed an image of the iconic robot (the one we auctioned on 11/2/10 for $4005, and the one we are auctioning in this current Halloween set of auctions!)."


In the same auction they sold an original German program for Metropolis for $3,105. One of the interior pages is reprinted here.


From Lash LaRue to Metropolis, always something old that's new comes to light.  Love it!