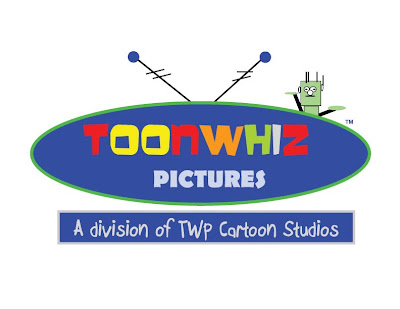 Introducing ToonWhiz Pictures, a great idea with a promising future.  First off, Toon-Whiz has an illustrious past before the new venture I became involved with about three weeks ago.  You can read about founder and CEO Troy Walker HERE and follow the link on that page to his listing on Wikipedia where it says:
Troy Walker is an American cartoonish, toy inventor, creative producer and founder of TWP Cartoon Studios. Walker is best known for creating off beat cartoon characters. He got his first commercial break with the wacky children's novelty fad, Hairy Pops finger puppets, used for promotion by the Supercuts chain of hair salons. 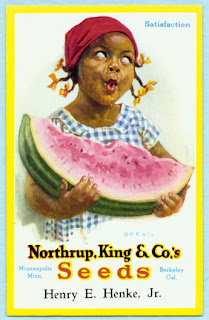 Troy Walker's mother Williejean was the young black girl eating a watermelon in an iconic advertising image from the 1940s.  When Troy described it to me, the picture came right into my head:


I know ToonWhiz Pictures as a storefront theater at 155 Filbert Street in the tourist section of downtown Oakland, CA.  I have never walked around that area, but I get the impression it is the Oakland equivalent of Hollywood Boulevard or San Francisco's Fisherman's Wharf.  In other words, large crowds of tourists visit the area shops and restaurants and take in tourist attractions like Ripley's Believe It Or Not. 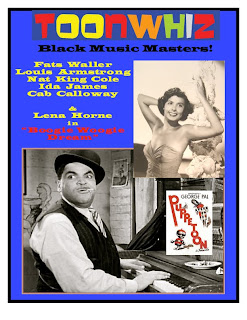 The theater has been open a short while on weekends and does get walk-in customers.  It is currently expanding from something like 20 seats before a large-screen TV to 80 seats watching projected films.  Admission is inexpensive.  While the details are sketchy to me, I do know the films well because I am supplying them, posters and DVDs to sell.

For the walk-in tourists they wanted a short show that has quickly evolved into the one on this poster.  The Puppetoon "Jasper in a Jam" opens, followed by Soundies with Fats Waller, Louis Armstrong and Nat King Cole -- then a Popcorn Intermission break where they make the real money -- Cab Calloway doing "Minnie the Moocher" and closing with Lena Horne's two-reeler "Boogie Woogie Dream" with Teddy Edwards Orchestra.  It runs about 45 minutes with the Intermission. 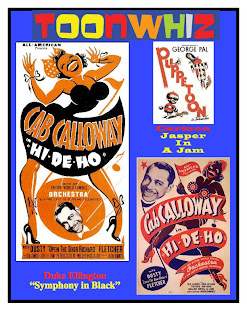 That show is designed to run during the day when they can usher in a new audience every hour, or folks can enter in the middle of the show, I guess, if it isn't full.  Then in the evening ToonWhiz plans longer programs with shorts and features.  I have already prepared these shows:

1)  Cab Calloway's Hi-De-Ho with "Jasper in a Jam" and Duke Ellington's "Symphony in Black."
2)  Paul Robeson's "Emperor Jones" with cartoon and Bessie Smith in "St. Louis Blues."
3)  Louis Jordan's "Reet, Petite and Gone" with cartoon "Scrub Me Mama with a Boogie Beat" and Cab Calloway's "Jitterbug Party."
4)  Lena Horne in "The Duke is Tops" with cartoon "Inki and the Minah Bird" and Ethel Waters in "Bubbling Over."
5)  Black Toon Festival.

I am also preparing the last one as a Festival Films release that will appear in my Cartoon Section soon.  Some of the cartoons do contain offensive images by today's standards, so I put the following statement at the head of my program: "Some black caricatures in cartoons of the 1930s and '40s may be offensive to some today.  The images of mammys, spooks, watermelons, Uncle Tom and Little Black Sambo were neither true nor funny.  However, the cartoons are presented here for their perspective on a part of black history that society has moved far beyond."

Troy Walker, definitely black and proud of it, has a more liberal viewpoint that requires little apology.  This is expressed in the foreword to each ToonWhiz program, as you can see in this video.  The music selection is Paul Whiteman conducting his orchestra in "Mammy."


Visit my website at Festival Films
Posted by Ron Hall at 9:11 AM