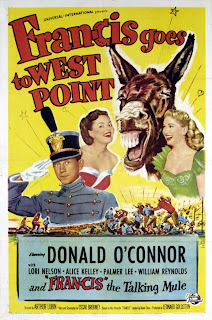 In the 1952 film "Francis (the Talking Mule) Goes to West Point," there is a scene where Francis is watching a horse race on TV late at night. I was initially confused, not over how the mule could talk or how he got a TV in his stall, but by how a horse race could run on TV in the middle of the night. Francis explains by saying, "Cheesy kinescope. Turn it off." When was the last time you heard anyone refer to kinescopes? This drove home the message to me that in 1952 everyone knew what kinescopes were, although the word today is as archaic as spats, limburger cheese or mustard plasters.

From Wikipedia: Kinescope (pronounced /ˈkɪnɨskoʊp/) – kine /ˈkɪni/ for short, also known as telerecording, a recording of a television program made by filming the picture from a video monitor. Typically, the term can refer to the process itself, the equipment used for the procedure (a 16mm or 35mm movie camera mounted in front of a video monitor, and synchronized to the monitor’s scanning rate), or a film made using the process.

In the 1950s TV viewers could only see programs live, from 16mm films that were sent to individual stations around the country or from kinescopes. Again, kinescopes were filmed by a 16mm or 35mm camera that was focused on a studio TV monitor while the live show was being broadcast to one portion of the country. 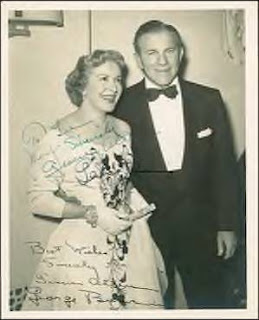 An example I have recently become aware of is the "George Burns and Gracie Allen Show." The first 52 episodes were filmed live in a New York theater stage. The single set was the interior of George and Gracie's house in Beverly Hills. George told jokes direct to the audience from in front of the proscenium arch, and freely acknowledged that this was supposed to be a set of their home in Hollywood. The commercials for Carnation Milk were cleverly worked into the show in long sequences where Gracie would serve milk and cookies, for example, as an opportunity for lauding the flavor of Carnation. The first show was on October 12, 1950 and the last live show aired Sep. 25, 1952.

Here are questions I could use help with. If the shows were broadcast live on the East coast, when and how were they aired on the West coast? Videotape and coast to coast instant transmission did not exist. It seems like the shows would be kinescoped live, turned into 16mm negatives ASAP and 16mm positive prints would be struck that night and airmailed West. Could they even get them out west the next day? This was the very early days of television from 1950 to 1952. When did a coast to coast relay chain exist so that a film airing live in the east at 9pm would play at the same time (6pm) out west? 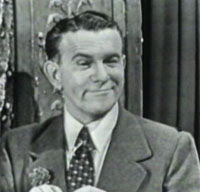 These Burns and Allen kinescopes were run in syndication for years to come. Numerous 16mm prints were struck and leased to stations around the country. Some were returned to central warehouses after showings, while many TV stations archived kinescopes/16mm prints for repeat showings. All of those libraries are long gone into the scrap pile or a few private collections. The first 52 Burns and Allen shows are in the public domain, but not all episodes are out on DVD. Could some be lost forever?

The quality ranges from mediocre to not bad, but the focus on the ones I have seen is soft or not sharp. This is a shortcoming of most kinescopes. Of course, 1950s TVs were far, far, far from High Def! If one could make out who the actors were, one could follow the story like filmed radio. Did the painted pool outside Gracie's kitchen window fool anyone in 1950? Possibly yes, on an average TV miles away from the broadcast antenna.

At least some of the first 52 Burns and Allen Shows are available for viewing and remain fascinating relics of early, live TV. Where are all the other episodes that were filmed on 35mm and shown from 1953 thru 1958? The IMDB researchers could not even find out how many were made or episode titles. Someone owns the shows, presumably CBS, but do they have them? Will they ever release them? If these later shows were in the public domain, then many more would be out there for the public to enjoy once again.

Gracie Allen: Well, you see one Christmas my father caught a wild turkey and he fed him corn and chestnuts. But then we didn't have the heart to kill him so we let him get away.
George Burns: Oh, I see.
Gracie Allen: But the turkey liked the food so well that he came back each year. And that way we always had...
George Burns: A turkey for Christmas dinner?
Gracie Allen: Yes.

www.caferoxy.com
Posted by Ron Hall at 9:32 AM