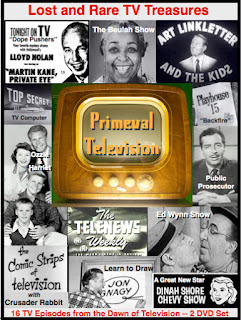 Christmas 2017 SALE: Just send $20 total via Paypal to fesfilms@aol.com. Your 2-disc set containing the 16 TV shows below will be sent right out.


The Lost and Rare 2-DVD set of PRIMEVAL TELEVISION is finished and ready to go at Amazon.com and the L&R website. The idea was born about 3 years ago when the Lost and Rare team started accumulating rare early TV shows that were not in the market place and that few had seen or even heard of. It is also available at Amazon.com for $24.95 plus shipping.

The DVD opens with a narrated introduction  (by partner Derek Myers) to the 16 films in the collection. This doubles as a prevue trailer that you can watch below. The first film is a 1945 documentary about television, rather than an actual TV show, that sets the stage for the 15 shows to come.


Tomorrow Television (1945)
Fascinating documentary looks at television in its infancy: interviews with General David Sarnoff and industry insiders, the science of vacuum tubes and transmission, a look at early studios, sports events and much more. The film was made by Uncle Sam to introduce G.I.s returning from the war to the job openings in the new industry.
Public Prosecutor (1948)
John Howard stars in a 17-minute mystery. This was the first TV episode ever commissioned to be shot ON FILM, instead of broadcast live like all previous shows. "The Case of the Missing Bullets" is the pilot episode filmed in 1947. ABC then ordered 26 episodes which were made in 1948.
The Comic Strips of Television (1948)
Producer Jerry Fairbanks and Jay Ward made this 15-minute pilot with 3 proposed cartoon characters. Crusader Rabbit was the only one picked up and it debuted on Los Angeles TV in 1949 as the first made-for-TV cartoon series. The pilot also has an early Dudley Do-Right and unknown Hamhock Jones cartoon.
Art Linkletter & The Kids (c. 1950)
Before “People Are Funny,” Art talked with kids in 15-minute episodes.
Playhouse 15 (1952)
Anthology series of short dramas that only ran 12 min. to fit in 15 min. time slots. Actor Jack Klugman is featured in one of his earliest TV appearances in “Backfire.”
A Great New Star (1953)
Dinah Shore became a major recording star in the 1940s and appeared on TV from 1951 to 1994. She sings two songs in this early infomercial/promotion for 1953 Chevy cars. 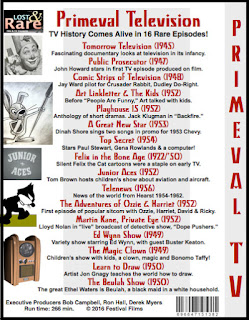 Top Secret (1954)
Few remember this early 12 minute spy film starring Paul Stewart, Gena Rowlands & the first TV computer!
Felix in the Bone Age (1922/’50)
Silent Felix the Cat cartoons with added music tracks were a staple on early TV, used in kid shows hosted by local talent.
Junior Aces (c. 1950)
We can find no history at all about this children's show about aviation and aircraft. Actor Tom Brown interacts with two onscreen kid sidekicks as well as all the Junior Aces watching at home.
Telenews (1956)
Hearst syndicated this weekly newsreel featuring world events from 1954-1962.
The Adventures of Ozzie and Harriet (1952) First episode of the popular sitcom with Ozzie, Harriet, David & Ricky. A very young David thinks about dating a girl. The only episode released without a laugh track.
Martin Kane, Private Eye (1952)
Lloyd Nolan in a “live” broadcast of detective show, this episode is titled “Dope Pushers.” Nolan also does the commercials live by visiting his favorite tobacco shop.
Ed Wynn Show (1949)
Ed Wynn hosted the first comedy/musical/variety show to be shot in Hollywood where it was staged in front of an audience and telecast live. 16mm kinescopes were then distributed to the rest of the country. Buster Keaton is Ed's guest in this episode.
The Magic Clown (1949)
Children’s show with kids, a clown, magic and "product placement" for Bonomo Turkish Taffy!
Learn to Draw (1950)
Artist Jon Gnagy first appeared live on TV in 1947 drawing an Old Oak Tree. His 15 min. "Learn to Draw" show was widely syndicated 1950 to 1955.
The Beulah Show (1950)
The great Ethel Waters is Beulah, a black maid in a white household. Beulah is the first African-American actress to star in her own TV series. Beulah was later played by Hattie McDaniel and then Louise Beavers.

Enjoy a quick peak at each of the 16 films in Primeval Television: