Every January First the number of american films entering the public domain is a big fat -- Zero.  However many rare films that happen to be public domain are found, restored and made available to film fans every year.  Here are my reviews of some obscure but quite fascinating forgotten gems that are newly available from Festival Films. 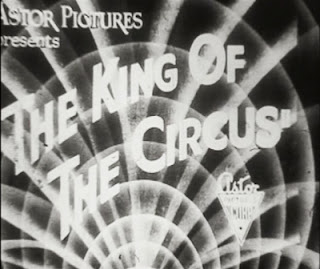 Circus movies nurture the dream of joining a world of glamour, excitement and sudden danger.  Many have tapped into this fantasy world from Chaplin’s The Circus (1928), The Greatest Show on Earth (1952), Trapeze (1956) to the recent Water for Elephants (2011).  Conflict often centers on the most colorful headliners -- the trapeze artists, magicians, clowns and lion tamers -- who still draw crowds today.

King of the Circus (1935) is set in the world of European circuses where the artistes are as acclaimed as opera stars.  A permanent arena replaces the familiar big top and the evening performances are attended by adults only.  Pompous Nikita (Gregory Ratoff) is the star attraction, a lion tamer who acquires a ferocious lioness, Caprice, who killed her previous trainer.  With the lion comes the daughter of the victim, Lida, who Nikita raises from child to young woman.  They inevitably marry but without real love from Lida, whose pain and confusion are evident to all except her husband-to-be.  Enter a matinee-idol magician named Trelawyne (John Loder) to challenge Nikita for star billing and the affections of Lida, while Caprice paces her cage awaiting revenge. 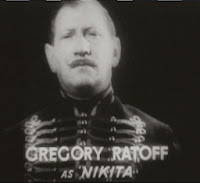 Gregory Ratoff was born in Russia in 1897 and entered the Moscow Art Theater after fighting for the Czar in World War-I.  Ratoff had a long and respected career in Hollywood playing comedy foreigners with heavy accents from I’m No Angel (1933) to Exodus (1960), with his most famous role being Max Fabian in All About Eve (1950).  He was also a prominent writer and director from Ingrid Bergman’s first american film Intermezzo: A Love Story (1939) to Oscar Wilde (1960).

It is both a surprise to see Gregory Ratoff starring in a dramatic role (that he wrote for himself) and a true delight at how effectively he portrays the obsessed Nikita.  His compassion at raising an innocent Lida to adulthood turns to blindness to her revulsion and fear at marrying him.  At heart a good man, he can not conquer his raging jealousy.  The film was originally titled “This Woman is Mine,” which accurately nails the raw theme.  Retitling it “King of the Circus” may have attempted to reach a wider audience, but make no mistake -- this is one circus film that is not for children! 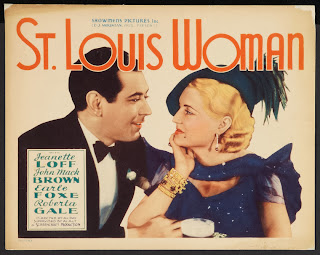 Athletic, likable and movie-star handsome, actor Johnny Mack Brown started at the top but soon descended into the “B” films he is famous for today.  MGM signed him to a contract in 1926 that found him playing opposite Marion Davies (The Fair Co-Ed, 1927), Norma Shearer (A Lady of Chance, 1928), Joan Crawford (Our Dancing Daughters, 1928), Mary Pickford (Coquette, 1929) and four films with Greta Garbo.  However, with the advent of talkies Brown’s acting limitations became evident along with his southern accent.

When John played the title role in King Vidor’s 1930 Billy the Kid an attribute emerged that type cast him the rest of his career -- he looked good on a horse!  After starring in the 1933 Mascot serial Fighting with Kit Carson and The Rustlers of Red Dog for Universal in 1935, he went on to make countless “B” or series westerns for Monogram Pictures and other small companies.  When the Saturday Matinee and B-western died with the advent of television in the early 1950s, Brown semi-retired and only made a few TV guest appearances.

Missouri Nightingale (1935) is a rare chance to see John (as he is billed here) in a dramatic role before becoming a cowboy.  It opens with him winning the big college football game, which was the sport that brought him to Hollywood.  Invited to a night club John meets blonde chanteuse St. Louis Lou (Jeanette Loff) who gets friendly to persuade him to play professional ball, but breaking training causes him to be kicked out of school and lose any chance of becoming a doctor.  His professional career gets off to a rocky start when his team sabotages every play, but Lou intervenes and he makes good.  As she falls further in love she hatches a plan to get John back into college.

Jeanette Loff was a promising singer with a pleasing personality.  She sang three numbers in King of Jazz (1930) but only appeared in “B” pictures like this one the rest of her short career that ended in a small part in Monogram’s Million Dollar Baby (1934).  Both stars click with engaging chemistry, one on the way to early retirement while the other is about to ride the range on a twenty year quest to uphold justice.  Johnny’s many fans are glad he learned to ride. 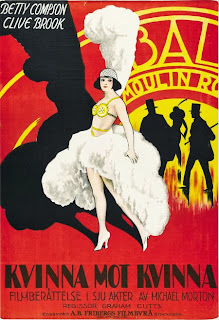 In interviews actress Betty Compson always sited Woman to Woman as her favorite of all the films she made.  They failed to ask her which version, since the 1923 silent film for which she was paid $3,500 a week appears to be lost and this 1929 early talkie remake has been unavailable for many years.  Both were based on a 1921 stage play by English dramatist Michael Morton.  The 1923 version was produced in England and gave Alfred Hitchcock his very first writing credit.

Betty entered vaudeville in 1915 at the age of 18 in an act “The Vagabond Violinist.”  Comedy producer Al Christie spotted and hired her to make dozens of one and two-reel slapstick comedies which he also directed.  Her big break came in 1919 when she was cast opposite Lon Chaney in The Miracle Man and the film became an enormous hit boosting both of their careers.  She appeared in 58 films in the 1920s, most for Paramount Pictures and usually top billed.  Her fame is largely forgotten today since so many films fall into the “lost” category.  One fact that attests to her box office draw is that she was paid $5,000 a week at the height of her popularity.

Compson’s acting skills may be appreciated as a prostitute in Josef von Sternberg’s Docks of New York (1928), in her Oscar-nominated role in The Barker (1929) with Milton Sills and Douglas Fairbanks Jr., and as the dancer obsessed over by egocentric ventriloquist Erich von Stroheim in The Great Gabbo (1929).  Woman to Woman was released right after Gabbo.  Having made a successful transition to sound films, but over the age of 30, Betty found herself on the brink of a swift decline.  Brief RKO and Warners contracts in “women’s pictures” gave way to smaller parts at poverty row studios Chesterfield, Continental and Monogram before she retired in 1948.

Woman to Woman is a four-star tearjerker that shows Betty at the peak of her skills.  As a cabaret dancer in Paris during WW-I she meets and falls for a young English officer.  They have a night of love and plan to be married the next day, except he is called to the front, gets amnesia in battle and disappears.  Four years later Betty is a celebrated dancer performing in London who runs into her love again and restores his memory, but alas he is married to a shrewish wife who will not budge.  They have a four-year-old son and other complications escalate from there to a heart-breaking, surprising climax.  Woman to Woman can only add to Betty Compson’s legacy that has been unjustly forgotten.

CHEATING BLONDES (1933)
Shop girl Thelma Todd is implicated in a murder, so to hide out she visits her twin sister who is a night club singer who wants a vacation.  They switch places and Thelma sings one musical number outfitted as the Butterfly Girl, shown in the film clip below.  The scene where the two Thelmas meet is missing from the extremely rare print that I found and supplied to Alpha Video/Oldies.com.  Thelma's reporter/boyfriend tries to expose her new life just for the story, and she justly jilts him at the end.  Includes a nice role for Hal Roach actress Mae Busch.  Produced, but never registered, by the obscure Equitable Motion Pictures Corp. The two Thelmas must be the "blondes" in question, but despite the title there is no "cheating" by either of them!