After Charlie Chaplin, Felix the Cat was the most famous icon in the entire world through the 1920s, and may still be the most famous cat in history.  Alas, Felix did not make the transition to sound.  He never found his voice and faded from the big screen in the 1930s.  It's a complicated story about Felix' owner, Pat Sullivan, becoming an alcoholic and dying in 1933 while Felix' creator and animator, Otto Messmer, went on to other projects.  Read all about it at Wikipedia or in John Canemaker's excellent 1997 book "Felix: The Twisted Tale of the World's Most Famous Cat."

Felix holds a unique spot in the invention of television.  Wikipedia: "Felix was one of the first images ever broadcast by television when RCA chose a papier-mache Felix doll for a 1928 experiment via W2XBS New York in Van Cortlandt Park. The doll was chosen for its tonal contrast and its ability to withstand the intense lights needed. It was placed on a rotating phonorgaph turntable and photographed for approximately two hours each day. After a one-time payoff to Sullivan, the doll remained on the turntable for nearly a decade as RCA fine-tuned the picture's definition." 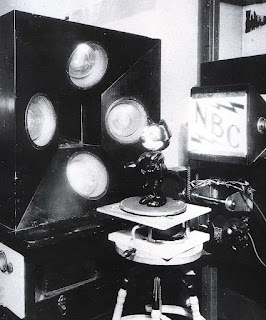 The broadcast image is shown above and the studio set-up on the right.

The silent Felix the Cat cartoons flooded into TV stations in the early 1950s on 16mm prints along with Edgar Kennedy and Leon Errol shorts, Soundies, B-westerns, syndicated series of live shows on kinescopes and anything else distributors could lease cheaply from defunct studios like Mascot, PRC and Monogram.  Outside of the network feeds still in their infancy, 16mm was the only format that local stations could use to expand their daily programming.

In 1953, Official Films purchased the Sullivan-Messmer shorts, added soundtracks to them, and distributed to the home movie and television markets. The films do not seem to have been sitting in some vault well preserved for re-release like at Disney or Warners.  More likely Official got whatever they could wherever they could from old exchanges, resulting in a great many Felix titles not being released to TV and many are still lost today. 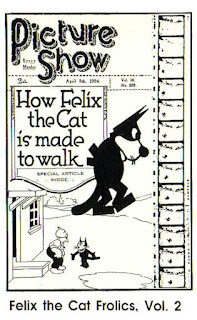 As a young film collector in the mid-1970s, one of the rare deals I stumbled into was acquiring over 400 Felix prints that had been sitting in an Official Films warehouse in New Jersey.  There were many multiple copies of the same title and only around 40 different ones.  I put every one in a projector to check the quality and made a curious discovery.  Some were quite nice quality with sharp focus and good contrast; while others were dupes with lesser quality and a third generation were dupes of the dupes with poor, muddy quality.  I conclude that Official quickly wore out their original negatives and copied the positive prints they had.  They must have churned out thousands of them!

Many of the vintage Felix the Cats are in the public domain because their copyrights were not renewed or they were never registered in the first place.  However, a great many were renewed and are still owned by someone, though I am not sure who.  The original © was by Pat Sullivan.  Some good cartoons I once had but could not release are Felix Hits the Deck where he gets mixed up with a deck of playing cards come to life, a Halloween themed Felix Switches Witches where he gets chased by a witch who removes her costume at the end to reveal she's a hot number, and Felix in Romeow.

Lest I forget to say it, most of the silent Felix the Cats personally animated by Otto Messmer are inventive surrealist gems that entertain as much today as the silent comedies of Buster Keaton.  My favorite public domain one is Felix in Comicalamities where the animator's hand helps Felix in a hopeless pursuit of a cute girl cat.  When she spurns him after he gives her a fur coat and necklace, Felix simply rips her off the sketch pad and tears her up.  Another great one is Felix Woos Whoopee, a 1930 sound one with a music track and mumbled voices but the style is exactly like the silent ones.  Felix gets drunk on New Year's Eve and is pursued by monsters on his trek home to wifey.  In Sure-Locked Homes Felix gets trapped in a spooky house pursued by monstrous shadows.

Because the original Felix holds a place in both the invention of TV and in 1950s TV programming, we plan to include one in the upcoming Lost & Rare Primeval Television DVD currently in preparation.  We are fortunate to have one that has been lost in its complete form for many years -- Felix in the Bone Age (1922).  At least it has not surfaced in any DVD collections to date.  IMDB only reviews a 3-minute excerpt: "Felix comes upon a caveman and his girlfriend. The girlfriend is crying, and when the caveman asks her what she wants, she points to Felix. The caveman chases Felix, who escapes by using the tails of some friendly monkeys to make his way down a steep cliff. Later he makes friends with a baby monkey, but winds up getting in a fight with a huge gorilla."  Here is a brief clip of The Bone Age that few have ever seen, followed by Comicalamities (1928).

16 mm film was introduced by Eastman Kodak in 1923 as an inexpensive amateur alternative to 35mm film format.  Initially directed toward the amateur market, Kodak hired Willard Beech Cook from his 28mm Pathescope of America company to create the new 16 mm Kodascope Library. In addition to making home movies on 16mm, one could buy or rent films from this library, one of the key selling aspects of the format.  Many silent films only survive today because the Kodascope versions found their way into collections. Felix in the Bone Age is one such happy print that still runs after 80 years!