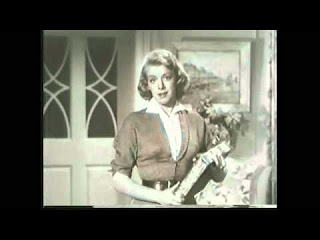 Yes, I have a Youtube channel.  I never planned to have one.  I don't promote it.  It's just kind of there.  Where?  Well, let's see, it seems to be exactly HERE!  It was started April 18, 2009 and currently has 69 videos.  The videos were put up for various reasons:

To promote series like the Saturday Matinees.
To illustrate topics discussed in my blog.
To post videos that Matinee at the Bijou could embed in their blog.
To post to my Facebook page.
A few copyrighted shorts just for fun.
For future projects not yet announced (and maybe never will be)
As Movie Memories sample pieces.

The most watched video may be First Buck Rogers Film with over 3,100 views. This 8 minute film is embedded on one of my web pages that promotes the free sample DVD, but most views likely come from Youtube searches for Buck Rogers. 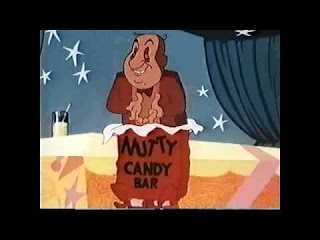 Second most watched is amazingly a copyrighted Screen Song cartoon Candy Cabaret that I only put up on Aug. 5, 2011 when I was researching the color bouncing ball cartoons. It's a lot of fun so go and watch it! 1954 Paramount "Noveltoon" cartoon. Although no longer called a "Screen Song" cartoon, it does feature a Sing-Along with the Bouncing Ball to the 1927 song "Ain't She Sweet." The final Bouncing Ball came along in 1963: "Hobo's Holiday." I believe it has gotten so many views because some other cartoon sites on Youtube have linked to it. They "monetize" views thru their site and so make money off my posting. Hey, folks, it's copyrighted and youtube or whoever owns the cartoon or the music could take it down someday.

I won't rewrite the above so you can see my surprise here when I just noticed that another Screen Song -- The Circus Comes to Town -- has had 4,250 views!  1947 Paramount/Famous Studios cartoon is the first official entry (of 38) in the revived "Screen Songs" series. It was preceded by five color Bouncing Ball sing-alongs. The song is "The Daring Young Man on the Flying Trapeze." Same story as for Candy Cabaret. I found I had and posted on Youtube for fun and it turns out the cartoon was not up there already so other sites linked to it. 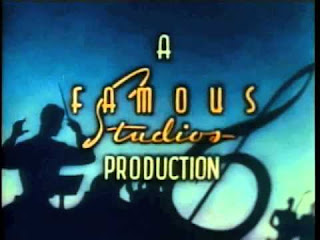 It is inscrutable - beyond reason -- why this has been watched 1,140 times Main title Only to Paramount's color "Screen Song" series, with the Paramount Mountain with clouds background logo. I thought I was re-creating the original opening, but the only comment I got was from a better expert on the subject who has a youtube channel called Paramountcartoons, who said I got it wrong. I wrote him, but received no reply. So perhaps I should have taken the video down, but left it up and all those folks have watched it since August.

Most Boring Scene Ever that was filmed for a Hollywood movie, from "Mystery Liner." This is for a DVD project of boring scenes to be marketed as a sleep aid -- "Sleeperzzz - Guaranteed to Put You to Sleep!" More about this later, or maybe not unless I can find someone to promote it in a big way as a Christmas present with the same camp appeal as that old Pet Rock!

Our Gang in "Good Cheer." The only Christmas themed Our Gang short was this gem from 1926 about a gang of thieves dressed as Santas. Where did Hal Roach get all that realistic looking snow? I put my copy of this up so I could share on Facebook. I just watched it again last night and see that some footage is missing that explains why or how a gang of crooks are dressed up as Santa Claus. Our Gang expert Dick Bann wrote me that this one is very hard to get a good copy of. So if he doesn't have a great one, probably no one does.

A number of recently posted videos are for a Matinee at the Bijou webpage that will discuss a typical sample show in a planned revival of the 1980's PBS hit show. Much more on this as it evolves. The four pieces of film I put on Youtube for this purpose are:

Also for Christmas is Rosemary Clooney sings for Christmas Seals was posted for Facebook friends. Please take a look if interested! And finally I only recently became aware that I had an Abbott and Costello Christmas show on Colgate Comedy Hour.


Visit my website at Festival Films
Posted by Ron Hall at 9:49 AM