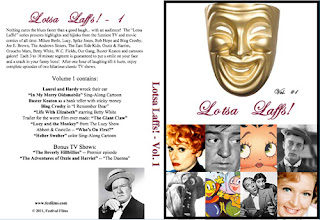 I have been pretty silent on this blog the last six weeks.  To anyone who has checked in to Nothing New, my apology.  I've just been busy with a lot of diverse projects.  No time!  I'm late!  Ta, ta, I must be going.  OK, here's just a bit about a lot, and more cookin' in the oven, with further reports when each project gets a goin'.

I met with a man who wants to start an All-Comedy Internet site.  When his father was dying with cancer over an extended period his main relief was watching vintage comedy, so the son would like to make laughter more available to hospitals.  I found out about "Laughing Rooms" in hospitals, still experimental, where patients can gather together to laugh at videos.  The same idea might be popular with retirement homes so I put together 4 programs I currently call "Lotsa Laffs!" Each 2-hour DVD has one hour of short comedy highlights designed to be a single movie session for seniors. One hour at a time seems to be ideal for this audience. The second hour is composed of two classic comedy TV shows from the 1950s. You can see the complete line-up of the four volumes  HERE. 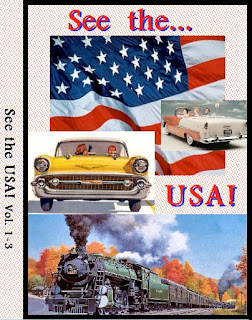 I have a new plan for creating the next volumes of Movie Memories, which is to first find and gather short segments along a theme, then turn into MM segments and lastly put together balanced programs.  So operating helter-skelter like I often proceed, I put cars, trains, travelogs and small town documentaries from the 1940s and 50s onto 3 DVDs that I call "See the USA."  It is ready to sell on its own if I ever put it on my website, or the segments are ready to have questions added to become Movie Memories.

I have turned most of the Paramount Color Screen Song cartoons into Movie Memories with the 4 questions at the end.  I did not bother with a few that would be deemed racist today.  "Camptown Races" features the all-star animal case of hippos, elephants, dogs, etc. in black face putting on a minstrel show! "Jingle, Jangle, Jungle" also has black stereotypes and you can imagine the jokes in "Heap, Hep, Injuns." 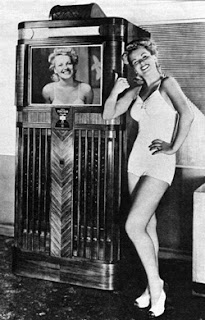 I also started a new project of collecting Musical Soundies from the 1940s.  These are 3-minute musical films that were played on juke boxes called Panorams, as per the charming photo on the left.  Major swing and jazz musicians like Jimmy Dorsey, Stan Kenton, Gene Krupa, Louis Armstrong, Fats Waller and Cab Calloway made Soundies.  Doris Day, Alan Ladd and Cyd Charisse made their first film appearances in Soundies.  Anyone interested in Soundies sinply must get "The Soundies Book" by Scott MacGillivray and Ted Okuda.  Try Amazon.com!

Some I have so far are merely copycat Soundies that probably played in the same machines.  Rudy Valle sings "Lydia, the Tatooeed Lady," for example.  Another I particularly like is "At Your Service," 1941 by Featurettes, Inc.  Three lovely carhops at a drive-in sing as they serve burgers to attentive male diners.  Since over 1800 Soundies were produced, this is a long range project to get a lot of the best ones I am still missing. 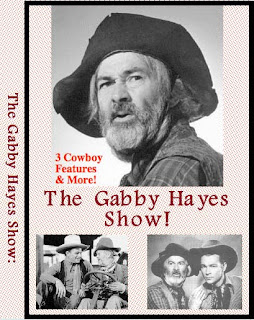 I have a new partner who thinks he has an outlet for selling DVDs.  I supply the films and ideas and he will do packaging, manufacturing and sales.  To keep the costs down, each release must run under 3 and 3/4 hours.  We want to offer a variety of features and shorts so the buyer gets a lot for their money. 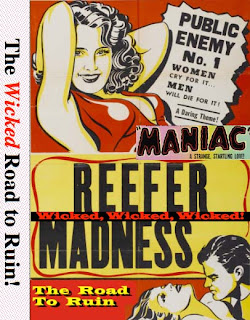 However, our first release is called "The Wicked Road to Ruin" and contains 3 short exploitation features:

"The Road to Ruin," (1934)  little seen and the inspiration for the title name.
"Reefer Madness" (1936)  being the most seen as well as most famous exploiter.  I recall seeing this in a packed movie theater revival in the 1970s, and I was never into the marijuana scene.  I made a poor hippie!
"Maniac" (1934) by Dwayne Esper is a special favorite that I find as funny and jaw-dropping awesome as Ed Wood's "Glen or Glenda."

A few JD (that's Juvenile Delinquent) shorts and trailers like for "Marijuana, the Weed with Roots in Hell" will round out the depravity... which I hope sells, though I don't know where yet!

I coulda, shoulda written about one of these ideas each week over the past months.  I planned to talk about even more today, like offering just the chapter endings from serials.  Not all my ideas are winners, but a web surfer might prefer to see the last 3 minutes over a complete chapter.  Hmm...


Visit my website at Festival Films
Posted by Ron Hall at 10:19 AM