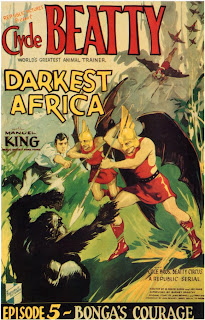 I have been fascinated by jungle movies since I was a child under ten.  The interest was likely ignited by my Tarzan double feature at the age of eight when I saw the giant vampire bats in Tarzan Escapes, and fanned by reading all the Tarzan novels as a teenager.  At the same time I grew up watching "Ramar of the Jungle" (1952-'54), the Gunga Ram stories on "Andy's Gang" and all the adventure serials I could find on TV.

The elements that still appeal to me are the wild animal fights, crocodiles and crocodile pits, boa constrictors, men in ape costumes, elephant stampedes, vine swinging and lost kingdoms -- action, adventure, thrills & horror!  Lost in the deepest jungle of darkest Africa the resourceful hero always finds a way to save the heroine from the sudden danger that lurks behind every bush.

During the last ten years I have been re-watching films I remember from my youth like Francis the Talking Mule, Ma and Pa Kettle, Charlie Chan, all the serials, B-westerns and so on.  I am still looking for some jungle serial that I recall clearly and think I even saw twice on TV.  The first chapter ends with a plane crash in the jungle.  The second chapter ends with the hero and heroine on a narrow ledge in a deep pit full of crocodiles.  They need to walk along this treacherous ledge to reach an escape door on the other side.  Their footing crumbles... do they fall among the gators? For a long time I was sure this was one of the two Clyde Beatty serials, Mascot's Lost Jungle or the early Republic Darkest Africa, except when I watched them, no crocodile cliffhanger.  Both serials do have crocodiles in pits.  Lost Jungle's first chapter ends with a dirigible crashing.  A later ending has Clyde hanging from the rim of the pit as he grapples with a bad guy, but no scene of that ledge.  Perhaps I dreamed it all and recall the dream??? 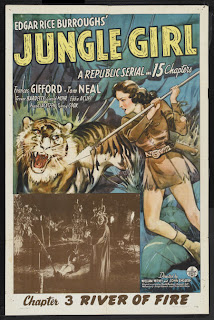 They made dozens of serials set in jungles from the silent era thru the fist sound serial King of the Congo (1929) up to the 1952 Buster Crabbe Columbia also called King of the Congo!  My favorite is Perils of Nyoka (1942) starring Kay Aldridge, Clayton Moore,  Charles Middleton and Lorna Gray.  Great plot that moves from one exotic location to another in search of a cure for cancer, slam-bang fights erupt in every new set with David Sharpe doubling for Nyoka, chases, imaginative chapter endings, a giant ape and more.  The Nyoka character (created by Edgar Rice Burroughs as a female Tarzan) also appeared in the 1941 Republic serial Jungle Girl.  I must confess I find the scantily-clad Frances Gifford the most fetching heroine in any serial.  Let's not forget The Tiger Woman (1943) serial starring Linda Stirling.

Searching for my lost serial that may not exist, I've seen some real losers in recent years.  Queen of the Jungle (1935) with Mary Kornman lost as a child and growing up to lead a jungle tribe.  The main interest was stock footage from a silent serial.  Jungle Queen (1945), with Ruth Roman battling Nazi invaders.  Jungle Raiders, 1945 Columbia serial with Kane Richmond. 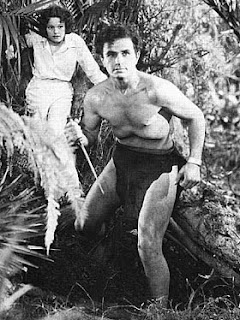 However, I have just seen a jungle serial that surprised me for being quite well made and entertaining: Call of the Savage (1935, Universal). Two competing teams of scientists search the jungle for a lost formula to cure infantile paralysis.  The secret was engraved on a wrist band given to the boy Jan who disappeared 15 years before and grew up to be Noah Beery Jr.  Jan swings on vines like Tarzan, kills lions, tigers and leopards after wrestling with them, and is dressed like and talks faltering English like Tarzan, but he's still a boy (23) with an amiable smile and infectious laugh.  It takes a bit to get used to him.

You will never get used to the heroine, Dorothy Short, who screams at anything and constantly wanders off so a ferocious beast can chase her.  In the middle they dress her in a tiger skin to match footage from some silent serial.  This changes to a leopard skin outfit without comment, as pictured in a chapter ending.  While Jan grapples on a ledge with a lion, Mona backs to the edge and falls into a river infested with snapping crocs! 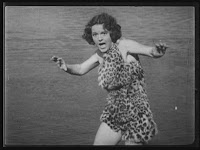 The jungle sets are well designed and alive with all imaginable animals: lions and tigers (yeah, together and fighting each other), crocs, tapirs, monkeys, giraffes, elephants, leopards, zebras, hyenas, gnus and some I can't identify.  There's also a man in a convincing gorilla costume.  Croc fights tiger, lion fights croc, Jan fights 'em all in hand-to-hand combat with a knife.  The fights are as good as any Tarzan movie since some stuntman really roughs it with his arm in the lion's fanged mouth.  Good animal photography of snarling tigers, etc., which may be from some silent serial.

It's a Universal serial so when they reach the lost city in chapter 10 action takes place on the Frankenstein castle set.  They use the giant bells from the 1923 Hunchback of Notre Dame, but it is newly shot footage because the monkey climbs the rope and plays with the bells, the ringing of which saves all from being speared to death at the end of chapter 11.

You can order Call of the Savage HERE. Meanwhile, I'll keep looking for that crocodile ledge that scared me as a child.

Visit my website www.fesfilms.com.
Posted by Ron Hall at 11:02 AM