The Birth of Festival Films! 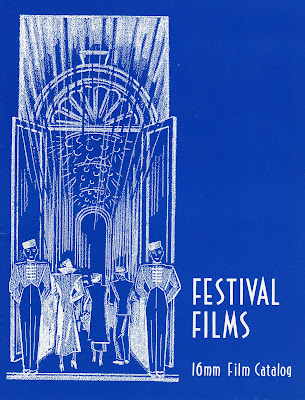 Two weeks ago I wrote about ideas for using public domain films. Nothing much is ever new NEW, but put together in creative ways one may find a profitable market. In brief I said: 1) Don't copy others. 2) Find a new audience. 3) Create a new product for that audience. This reminded me how Festival Films started 35 years ago following those same principles. It all began way back when...

I bought my first 16mm film in 1968. Not sure which feature I got first, but Goldiggers of 1933, the 1949 Mark of Zorro and Bride of Frankenstein were among the first acquisitions. Oops, off track. I moved to Minneapolis in late 1969 to work at the Tyrone Guthrie Theater. I ran the "Xanadu Film Festival" film society from 1971 to 1974 on the University of Minnesota campus. I invested that added income in more 16mm films, which we showed again and again at the society.

During my film buying of the early 1970s I came across several companies that openly sold 16mm films through catalogs -- Griggs Moviedrome (run by Robert E. Lee), Thunderbird Films (Tom Dunahoo), Em Gee Film Library (Murray Glass), Niles Films, Wonderland Films and of course Blackhawk Films. Wonderland sold a lot of copyrighted films they did not have the rights to sell, and some private individuals did that as well. Blackhawk had licensed films of Laurel and Hardy and Our Gang. But those other companies, particularly Griggs and Thunderbird, sold the same films month after month from negatives and they added to their catalogs with new releases. That is how I discovered public domain films. 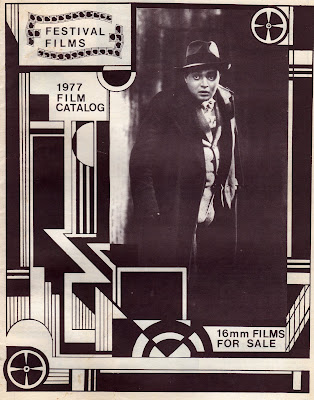 On a parallel track and because I showed films on the University campus, I came to notice that many colleges taught film making or at least had basic film history courses. I had taken a few at the University of Wisconsin from 1964 to 1968. They used the same classics year after year like Birth of a Nation, Potemkin, Grand Illusion, The Great Train Robbery, A Trip to the Moon -- but they rented them with mixed results from Budget Films, Films Incorporated, Audio Brandon, Kit Parker Films and Swank Films. Before Video this was the only way to show films. However, prints were often scratched and worn out or incomplete or of poor quality.
After a few years of groggy awareness of the situation, the big idea finally permeated my skull -- I could sell new 16mm prints from the film companies I had a relationship with direct to colleges who were unaware that they could OWN films they were currently RENTING. When I went to the 16mm suppliers I was delighted to find that would not only work for them but they could offer me an additional discount. Therefore I could retail the films for the same price they sold them for and make a good profit off my discount.
My wife Christine and I began selling to colleges in 1975 via small lists. It was successful enough to issue a 32-page catalog in 1976 that is dated 1977 -- the one shown here with Peter Lorre from "M." The text was typewritten with larger film titles in press-on lettering. The prices of brand new lab prints was absurdly low, with the price of a two-reel Chaplin at $50 and a two-hour film like Paisan at $225. A few years later Eastman Kodak doubled the cost of raw film stock but in the 1970s it was quite cheap.
In the catalog introduction I say: "Welcome to our third year as 16mm film distributors! All films listed in this 1977 catalog are FOR SALE. All films are out of copyright and so may be legally purchased. They may be used for most public and private screenings by film collectors, film societies, schools, libraries and art museums. You may charge admission for the showings. Some of the silent films are available with newly-recorded music tracks which have been copyrighted, and so these prints may not be shown theatrically or on television without permission. All films are in new condition and are printed at professional film labs." 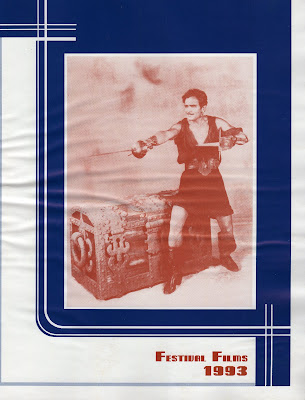 The idea of selling a new product to a customer base who needed them ... worked incredibly well! In retrospect I could have quit my day job, invested $10,000 to reach every college and library in the country, hired people and made my fortune before I was 30. Actually someone else did this. About two years after we started, Reel Images showed up doing the same thing. The two owners were Jon Sonneborn and Marty Kearns. One summer on a trip to Hollywood we visited Marty in a little office where he and three hired assistants were processing orders by putting 16mm films on reels and boxing them up to ship. Four guys, as I recall, and Jon had another operation on the East coast. That's when it hit me. I could have been big. But I did not have the business training to know how to build on my success. I did not strike while the old iron was hot.
The catalog at the top is our last 16mm film catalog, dated 1988. The one at the bottom is our last printed film/video catalog from 1993. A lot happened in between and since.


Visit my website at Festival Films
Posted by Ron Hall at 8:10 AM