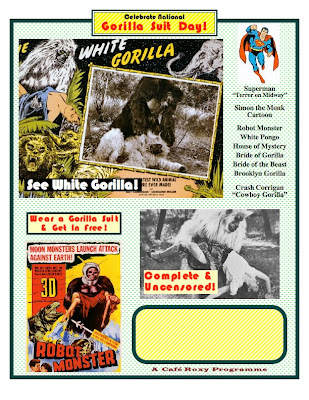 Plans are well underway around the world to celebrate Gorilla Suit Day on Jan. 31. Since that's a Sunday, feel free to have a party Saturday as well. International plans are being coordinated by Brett Stone out of Australia. Please visit his Facebook Page, join, become a fan and start those party plans.

Now what exactly do gorillas like to do at a party besides eat bananas? Watch gorilla movies, perhaps?

I have 3 distinct programs ready to roll on Gorilla Suit Day Weekend, Jan. 30-31. The first is Gorilla Brunch for the Minneapolis Suburban World Theater. This is a one hour program of trailers for gorilla films and monkey cartoons. Since it is usually a Cartoon Brunch, I include Superman in "Terror on the Midway," Simon the Monk in "Monkey Doodle," "Marty the Monk" and Grandpa Monkey in the color "A Busy Day" (1940). The show repeats after an hour as it is meant to be viewed casually by whoever comes to eat brunch in the theater-cafe.

The second show is a Saturday Matinee for the Parkway Theater. This is a two hour show at noon both days. Because it is a Matinee it includes a chapter of "Flash Gordon Conquers the Universe" serial. Instead of the very hip "Monkey Doodle," I am inflicting a pretty dreadful Betty Boop cartoon called "My Friend, the Monkey." It is not only a late Betty from 1939, but features her cuddly dog Pudgy. A swingin' hurdy-gurdy man goes by Betty Boop's house; she wants to buy the monkey, which causes plenty of trouble for Pudgy the Pup. Finally friends. This runs first and hopefully everyone will come ten minutes late that day. The matinee feature is "White Gorilla." (The brunch only shows the 4-minute trailer for "White Gorilla.")

Developing the 2 shows for 2 specific venues led to the ultimate hybrid Gorilla Suit Day Video. I dropped Betty Boop and the serial and added Monkey Doodle and more trailers. The result is the show in the poster above. You can download the poster for your showing here and email it to all your guests. Here is a run-down of every film in the program: 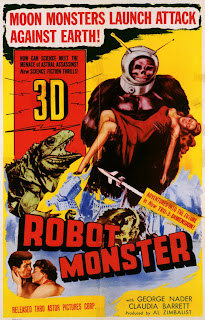 1) Opening with a segment of "White Gorilla" Trailer and credit to Don Martin for creating the insanity.
2) Trailer for "Bride of the Gorilla" (1951) that makes the film sound more exciting than it actually is. Name a trailer that doesn't work this way! A decent cast includes Raymond Burr, Tom Conway, Lon Chaney Jr. and Barbara Payton. Most of the gorilla scenes are in the trailer.
3) A five-minute or so segment from "Bela Lugosi Meets a Brooklyn Gorilla." (1953) Two goofy entertainers meet a mad scientist on a jungle island. Dean Martin and Jerry Lewis look-alikes get mixed up with two gorillas in pretty good suits.
4) "White Pongo" (1945) -- the climactic fight between white and black gorillas. Made the same year as "White Gorilla" and with Ray Corrigan inside one of the suits, Pongo employs more tree bashing than "White Gorilla," so I would guess it was made right afterward or by a more creative director. "How can we top that White Gorilla bash-a-thon? Hmm...."
5) Simon the Monk in "Monkeydoodle" (1931). One of the strangest and rarest cartoons you will ever see, animated by Les Elton.
6) Ape climax from "House of Mystery" (1934). Secret corridors, mystery, murder and a rampaging ape. Great ending when the detective tries to take off the head of the dead ape to see what mystery villain is inside the suit. "His head won't come off. Why, this ape's the real mccoy!" 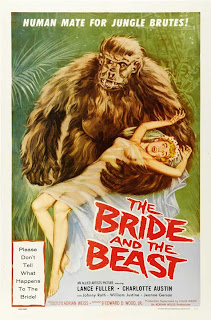 7) "The Bride and the Beast" trailer (1958). This one is wild and campy from the demented pen of Ed Wood, Jr. "On her wedding night her husband's love brought the beast to raging fury." Why they keep a caged gorilla in their bedroom is not explained in the trailer.
8) Superman in "Terror on the Midway" (1942). Guess what escapes?
9) The awesome trailer for "Robot Monster" (1953), which needs little introduction.
10) Trailer for the original "King Kong" (1933).
11) Bob Hope, Bing Crosby, Dorothy Lamour and a gorilla suit in "Road to Bali" (1953).
12) Tribute to Ray Crash Corrigan with the clip from "Come on Cowboys" (1937) that you can view right this second on Youtube.
13) White Gorilla complete and uncensored! It only runs 61 minutes and has nothing objectionable that anyone would cut. I first saw this film in the Minneapolis Walker Art Center, presented by William K. Everson in a program called "Movies out of nothing." Ray Corrigan spends half the film in a tree or behind a bush watching footage from a 1927 serial, all the while pretending to be in that movie. It is great fun and features two gorillas, as you can see in the White Gorilla trailer.

How can one see this ape-or-ific grandiosity on Gorilla Suit Day, one might ask? Here is how! I normally sell shows for $25, but will ship Gorilla Suit Day to you for a mere $5 bucks, which includes shipping. I just want it to be seen and enjoyed on the day of days. Money back guarantee if you don't love the program. What else will you be doing at your gorilla day party?

All films are in the public domain. You can show them publicly, advertise and charge admission if you like. The special contents of the program are copyrighted by me, so you can not copy and re-sell the disc. The $5 complimentary price to cover shipping and handling is meant for home showings where no admission is charged. If you manage to show it in a theater that rakes in the dough (!), kindly send me a modest cut of the take. I am not really joking here. This program has enormous potential to find a cult audience, but that will only happen when it is widely shown and earns a reputation.

I take Paypal to fesfilms@aol.com, personal checks made out to Ron Hall or a $5 bill in the mail sent to: