I now have over 50 programs ready to go into any café or bar that wants to give them a try. While putting each show together, my foremost thought has been "Will people enjoy these films in this kind of setting." On the finished shows my answer was naturally yes. If I didn't see the potential for Cafe Roxy becoming a big success in some venues, I would not be so optimistic. I would also not find something to write about here every week!

Yes, a film audiences will enjoy the shorts -- cartoon, serial, TV show -- and the features if they stay for them. Even if some leave a little way into the features, the films will have achieved their goal of attracting an audience who eats and drinks and has fun and will come back next week. It's a free show that sets your establishment apart from others, so don't be dismayed if some leave in the middle.

The completed shows fall into 4 series grouped around complete Serials shown one chapter a week. The All-Star Dozen is comprised entirely of shorts -- several cartoons, serial chapter, episode of the Beverly Hillbillies, Buster Keaton silent comedy and something special each week like Louie the Dog or Spike Jones. I'm not saying who or what Louie is, but take it from me he is an audience favorite that I have gotten requests for from viewers who only saw Louie once 40 years ago.

Undersea Kingdom is the serial that anchors this series for 12 weeks. It has everything kids loved in Saturday Matinees -- a muscled hero in a sci-fi costume, slimy villain, robots, futuristic air ships, stunts, action and cliffhangers. The trailer for this serial appears in the Free Sampler DVD. In fact the all-star shows are very much like the Sampler. Shorts allow your customers to come and go freely without missing much. If there is still a crowd at the end of the two hours, you can re-run from the beginning until the last patron leaves. 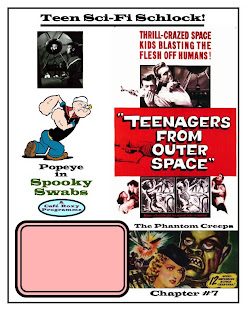 It's time to ask the weekly question. If you put up the poster on the right, will people come?

The 12 Nights of Horror include standard screamers like Night of the Living Dead and White Zombie that still send viewers home with a chill and glance over their shoulders down deserted, ominous alleys. The Brain That Wouldn't Die tries to scare but elicits giggles instead. Teenagers from Outer Space was a major hit on Mystery Science Theater 3000. Several others Like the eerie Carnival of Souls were independently made, which is why the makers didn't know how to copyright them! That includes prolific schlock director Roger Corman, whoseThe Little Shop of Horrors is an all-out comedy that works.

I feel each of the final 12 features entertain today.

A few titles did not make the cut. Teenage Zombies was not good enough quality and also simply boring. Maybe I can edit it someday down to ten solid minutes of thrills, laughs or any reaction other than snooze, but don't look for it soon! I eliminated two good titles because they were British films that seemed difficult for a drinking crowd to get into. I still recommend these for home viewing. Sweeney Todd, or The Demon Barber of Fleet Street, stars the supremely greasy Tod Slaughter. Just like Johnny Depp in the recent remake, Mr. Todd is a barber who turns clients into meat pies with a slit of his razor. Another British film I took out was Bela Lugosi's Dark Eyes of London, also known as The Human Monster. Pretty good, except all the actors other than Bela are British and the pacing at the start is slow. When a show is free, your audience can leave quickly with nothing lost, for them, and I didn't want to risk that. My substitute was the safe comedy with Lugosi and the East Side Kids, Ghosts on the Loose. You may like Leo Gorcey, Huntz Hall and the gang, or loathe them, but the film moves right along for the many who have never faced that decision before.

www.caferoxy.com
Posted by Ron Hall at 11:07 AM