What Kingdom Is This Anyway? 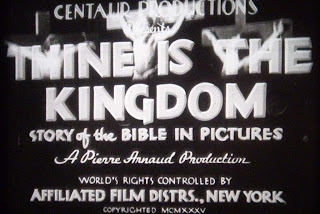 An interesting 1935 film came my way this week -- Thine is the Kingdom, Story of the Bible in Pictures.  The main interest is that no information can be found about it.  It is not listed at IMDB, nor is Centaur Productions or producer Pierre Arnaud, nor is there any info anywhere on the Internet or in J. Stephen Lang's book "The Bible on the Big Screen."  None of the actors are recognizable, so they are all amateurs or perhaps foreigners.  The hairstyles and make up of the women suggest 1920s.  It could well be a silent film re-purposed for sound since it is narrated with music but the illustrated scenes have no sound effects.  Research so far has not found any silent film from any country with scenes from the Old and New Testament.

Mr. Lang's book only covers Hollywood or foreign studio productions of films based on bible stories.  He states that no major bible films were made during the 1930s and 40s.  Thine is certainly not a major studio film.  It is mainly a curiosity.  Stories covered include Adam and Eve, Cain and Abel, Noah's Ark, (not Moses), Lot and Abraham, Elisha raising a dead child, Good Samaritan, many more, and of course the life of Christ.  It is rather cheaply produced with a small cast and many settings being outdoors or in huts.  The main design is costumes, as shown in the picture below.

This boring, lackluster poster was auctioned last year for a whopping $11.  Adam and Eve might have sold more tickets.  What, if anything, will cover their nudity?  It is a standard 28"x40" theatrical poster, which implies the film was run in movie theaters.  The auction house, emovieposter.com, has an unusual request attached: "Thine is the Kingdom, the circa 1930s religious melodrama ("All - Thrilling - Singing - Music"). If anyone knows more about this movie, please e-mail us and we will post it here."  So they never heard of it before either. 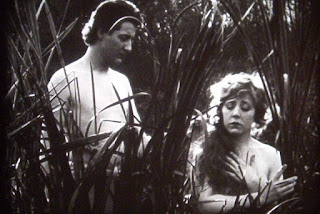 Thine is the Kingdom might have been distributed in the manner that exploitation films were taken town to town by enterprising distributors, heavily advertised for a week in advance via posters, then shown for single nights to packed houses either in a movie theater or exhibition hall.  Wikipedia: Exploitation film is an informal label which may be applied to any film which is generally considered to be both low budget and of low moral or artistic merit, and therefore apparently attempting to gain financial success by "exploiting" a current trend or a niche genre or a base desire for lurid subject matter.   Except for this film the attraction would be the highest moral value.  The "Bible belt" might have jumped at any chance to see the Bible brought to life.  Showings might well have been presented on 16mm film.

The film might have been produced by a religious group and distributed at a minimal cost to churches.  A number of independent companies specialized in such films, particularly in the 1950s for TV.  Cathedral Films produced the trend-setting The Great Commandment in 1939 and I Beheld His Glory in 1953 for TV, among many other projects.  Church-sponsored films are often in the public domain because the producers dedicated them to the public and hoped for as much exposure as possible around the world.  More info can be found at Christian Film Industry entry at Wikipedia, which notes that the industry only took root and took off in the 1940s.

So what exactly is Thine is the Kingdom, Story of the Bible in Pictures and where did it come from and does anyone want to see it today?  If anyone knows or hazards a guess, please contact me.  We can include it in a future Lost & Rare release, as it has been truly lost and rare, but first will give some thought on how to find an audience. Meanwhile, here are the opening scenes!

Visit my websites at Lost & Rare and Festival Films.
Posted by Ron Hall at 10:46 AM